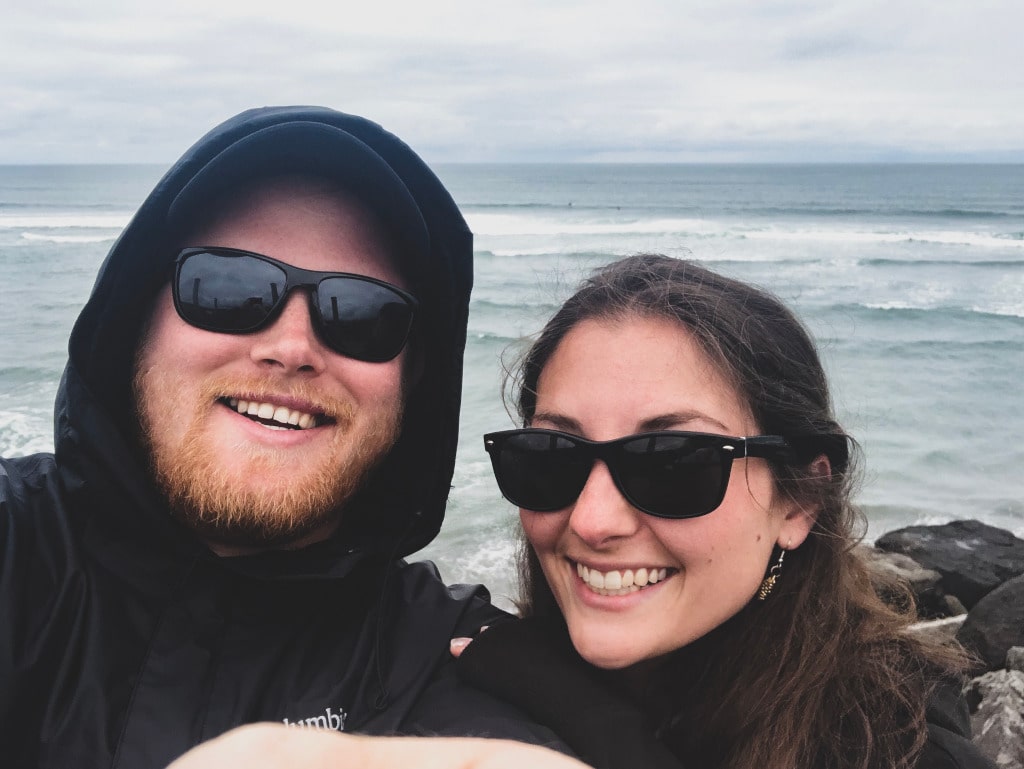 This tale begins with a chef. He worked in an oyster bar, in the coastal city of St. Petersburg, Florida. He was passionate and creative, and in love with his bride-to-be. She was an assistant general manager at the restaurant across the street.

They met in high school, and had been inseparable for eight years. On April 18th, they began their journey to tie the knot. They drove for two weeks through the major cities of Atlanta, Nashville, Memphis, St. Louis, and Denver only to stop at their wedding destination: Jackson, Wyoming.

On May 4th they said their vows and celebrated the next chapter of their lives inside Grand Teton National Park, during sunset, on a riverbed, with the mountains behind them. But those mountains were only the beginning. 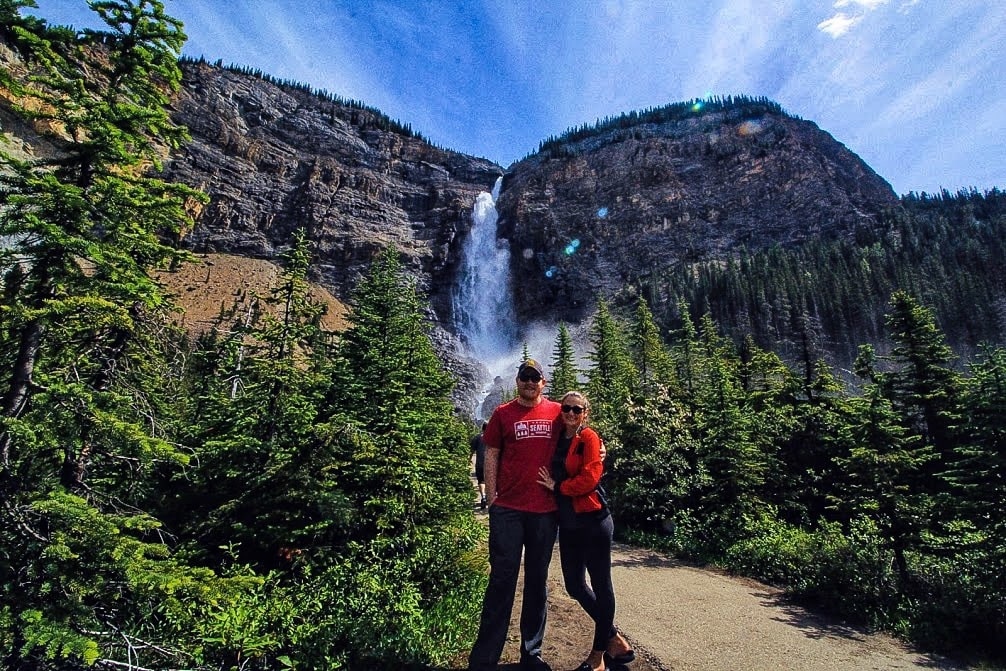 Once families flew back to their lives around the country, the Forresters began their journey into the Pacific Northwest. The start was Livingston, a tiny little mountain town tucked into southern Montana. A place where history, tradition, and community thrive, it was a place where maybe one day they could settle down and call home.

The original plan was to get straight into the mountains, but since it was early May there was still a lot of snow and their tiny 2017 Chevy Cruze would not like those conditions. Instead, the newlyweds did some route modifications, and to the Columbia River Gorge they went. To vineyards and cliffsides, the majestic terrain towered their initial perception. To Portland, Oregon, where they ate some life altering cuisine and visited the Japanese Gardens, and enjoyed the smell of the pines even in the city limits.

But they were still not quite satisfied. Their idea of their honeymoon was to get lost in nature. Their car was practically overflowing with camping equipment, hiking necessities, and photography paraphernalia. They didn’t spend much time crafting their next stop, a hidden gem before the Oregon coast.

Astoria, this sleepy little town on the mouth of the river, is the perfect maritime town. There are a plethora of seals that bark off the docks, coffee shops in old tuna canning factories, and breweries galore. It has some years on it and the locals embrace the town they work so hard in. One can see why The Goonies was filmed here, it is a town of blue collar citizens, who enjoy the little things in their time off. 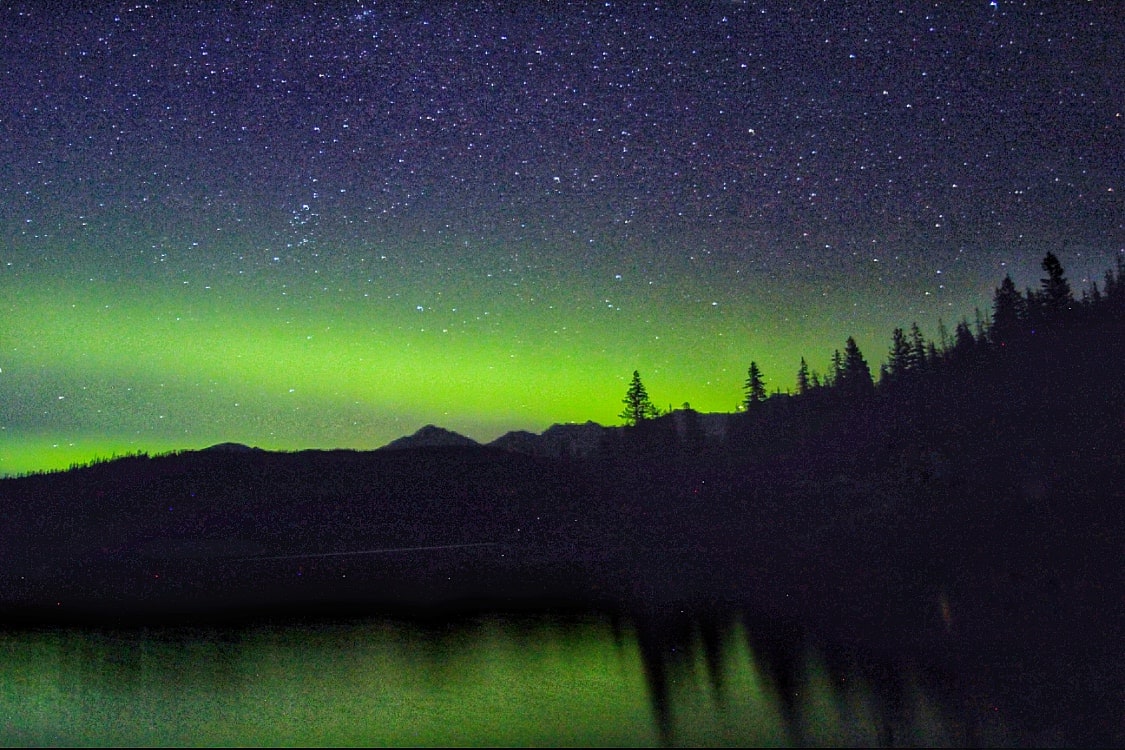 For instance, Fort Stevens State Park, home to the notorious wreck of Peter Iredale, a four-masted steel barque sailing vessel than ran ashore in 1906. The couple camped in the forests of the state park and ate locally caught crudo and drank wine by the campfire. It was just the dawn of those indulgences.

After a few days of sea salt breezes and forest floors, they made their way down the Oregon Coast to Cape Lookout State Park, where they set up camp with only a brief walk to the ocean. They hiked along the coast and explored the creatures of the west, so bizarrely alien than what they were used to in Florida. There were velella velella, or sail jellies everywhere they looked, dried and bleached, tucked between the boulders and driftwood. Empty clam shells sat in clusters from seals or happy gluttonous campers. The sea stacks were magically breaking the horizon into digestible chunks, picture perfect.

They drove to Tillamook, a town known for their dairy farms and ice cream. They learned about oysters, how they develop, and even attempted a hike to the oyster beds at low tide, only to fail miserably and briefly get stuck in the mud along with the rest of their guided group.

It was at Cape Lookout that the newly married Mrs. Forrester spent her 27th birthday. Her chef of a husband whipped up a feast, all by campfire, amazingly enough. She made lemonade by hand, while he whipped up carrot top pesto, corn on the cob, cast-iron roasted carrots, sauteed clams, roasted asparagus, ash cooked potatoes, and steak. It was a feast to remember, and as they finished off their bottle of wine they walked out to the beach and watched the sunset cast purples, pinks, and oranges on the Pacific Ocean. 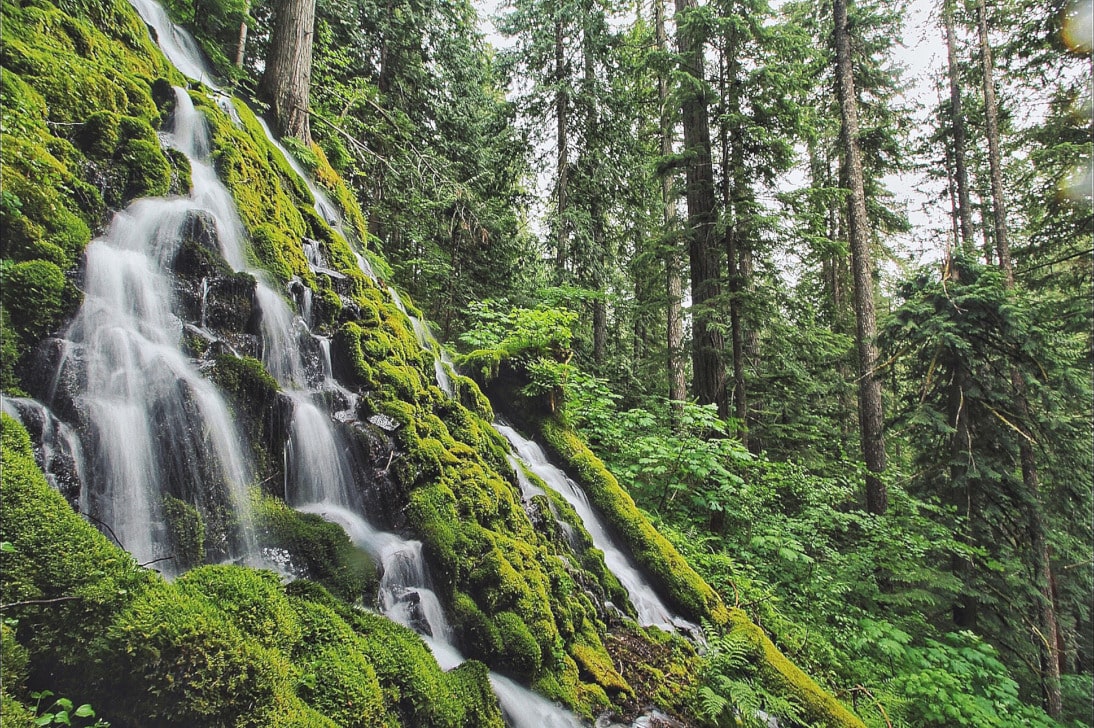 To Cape Perpetua they drove, stopping only once to find the untarnished tidepools near Yaquina Lighthouse. Sea urchins, star fish, sea anemones… the list goes on. Cape Perpetua was a bit different that Cape Lookout. It was a short hike to the ocean, but was more a rainforest than an ocean-front property. They found an ideal campsite, set up shop, and even found a small trail to a creek where they hung a hammock and read their novels while swinging gently over the babbling brook. Later they were even able to check Thor’s Well off of their bucket list. Now, they had been on an epic camping trip before, and knew to find a place to stay when Memorial Day was upon them.

Back in Tillamook they received a local tip to check out Eel Creek Campground on the outskirts of the Oregon sand dunes. Initially, this place was weird and definitely not their vibe. There were atvs, and four wheelers everywhere, actually that was all they heard most days. The dunes were pretty unique to check out and after a week it kind of grew on them, but they were ready for their next destination and away from the motorcross. 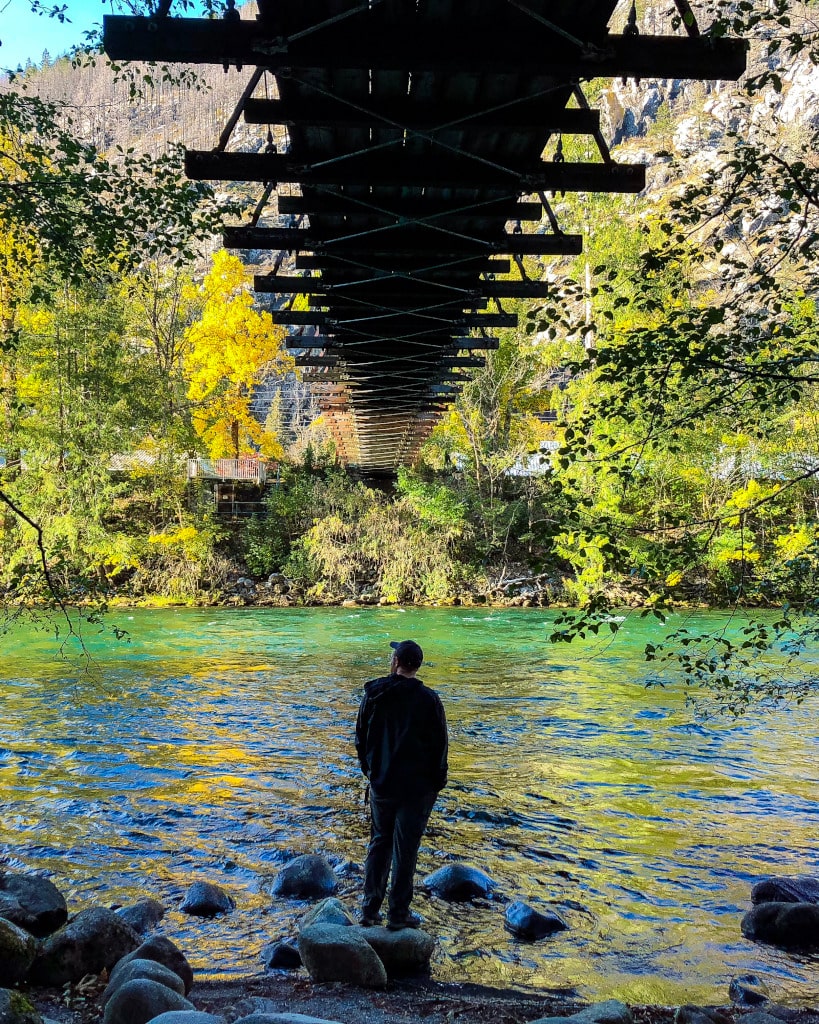 Redwoods State Park was what they’d call home for five days. They hit two campgrounds: Mill Creek, and Elk Prairie. Mill Creek was quiet and secluded. They listened for the calls of foxes and whos of owls. There were a few trails off of the grounds, but overall it was serene to hear the wind in the ancient trees. It was in Elk Prairie where their first demanding hike took place. They found a utopian site in the packed grounds, it was large and spacious, with a creek behind them. It was here that they saw a fox for the first time, it practically run into their camp site. There were giant elk that roamed the grasses in front of the campground, which at sunset is a sight to see.

The hike: James Irvine Trail, to Fern Canyon, to Gold Bluffs Beach Campground, to Miners Ridge Trail which took them back to their camp. In total, it was almost 14 miles, and it was well worth it. The trails are known as the best for viewing the redwoods, and it takes you to Fern Canyon which is a mile long and cloaked in 325 million year old ferns. Spielberg filmed parts of Jurassic Park 2 in the vertically walled canyon and once you get inside the green hall you know why. There were little waterfalls trickling around every nook and cranny, and the ferns danced in the winds, it was majestic and otherworldly. Another bucket list item checked off. 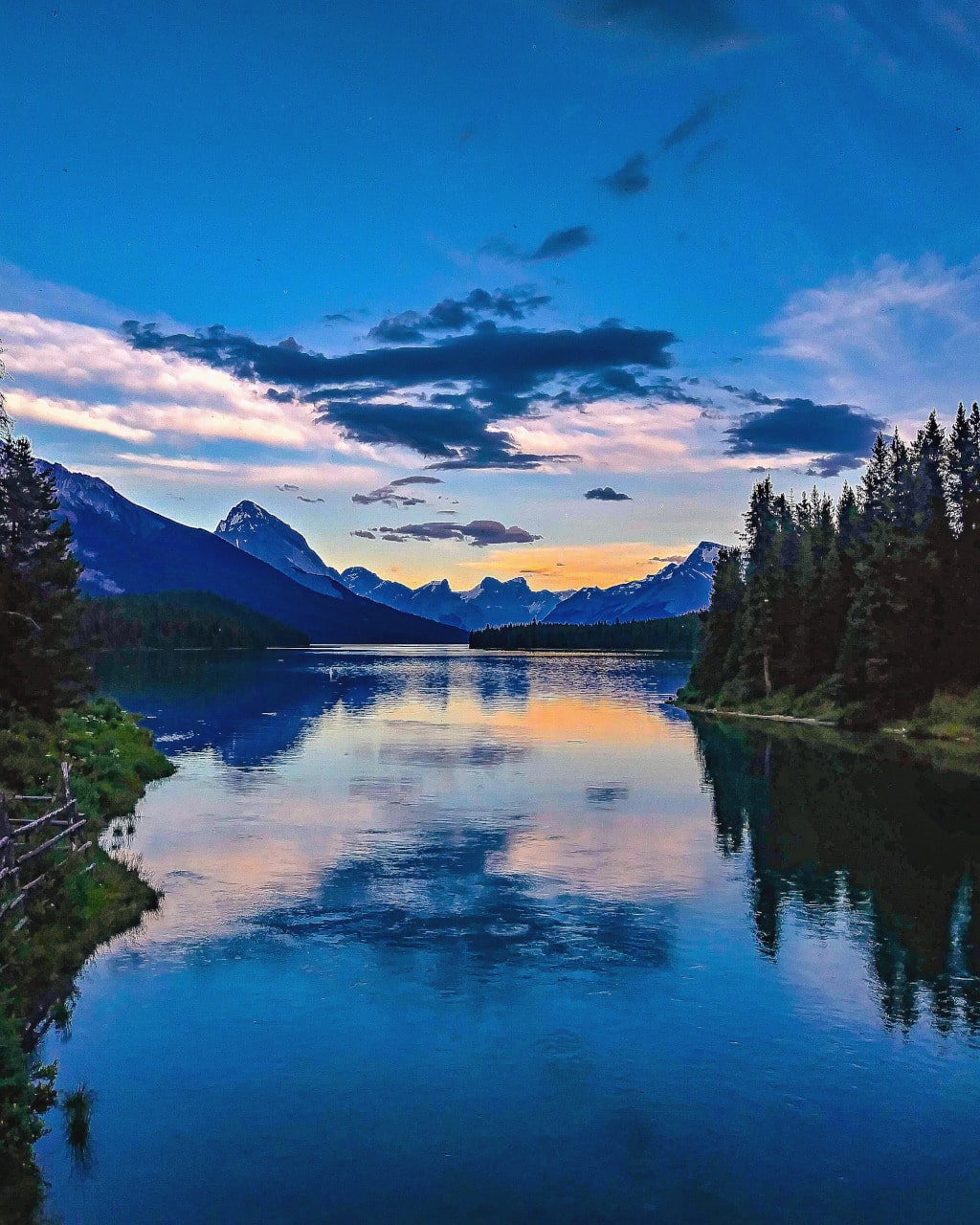 For the next few days they made their way through the interior of Oregon and Washington. They drove around Crater Lake National Park, to a dozen waterfalls, to the lava tubes of Mount St. Helens, to Mount Rainier National Park, and made a necessary pause in Birch Bay before cruising through the Canadian border.

It was a first for them, driving through border patrol, but once they made it through, the anxiety faded away and they were officially in the Crown of the country. They ate sushi and asian cuisine in Vancouver. They took a four person plane ride over the Squamish River, Brackendale Eagles and Stawamus Chief Provincial Parks. They awed at the rolling hills near Kamloops, set up camp in Glacier National Park of Canada, stopped in Yoho National Park, and entered into the tourist populated areas of Banff.

Banff was reminiscent of Jackson Hole, Wyoming. They are both mountain towns that strongly embrace their character and location. They have shops devoted to the tourists, and they both have restaurants grasping the local cuisine. Jackson Hole is very much a cowboy town, whereas Banff is a town built with European design in mind.

They ate chocolate covered beaver tail pastries and starred up to the top of Takakkaw Falls, a 1,250 foot cliffside waterfall, one of the highest waterfalls in Canada. They drove east to Calgary and then north to Edmonton and then west to Jasper National Park. It was on Pyramid Lake where another bucket list item was scratched off, the Aurora Borealis. They photographed the dancing lights and the milky way for hours on the lakeside. They hiked eight miles to the top of Bald Hills trail to see the mountain peaks and an aerial view of Maligne Lake from 2,300 feet up. 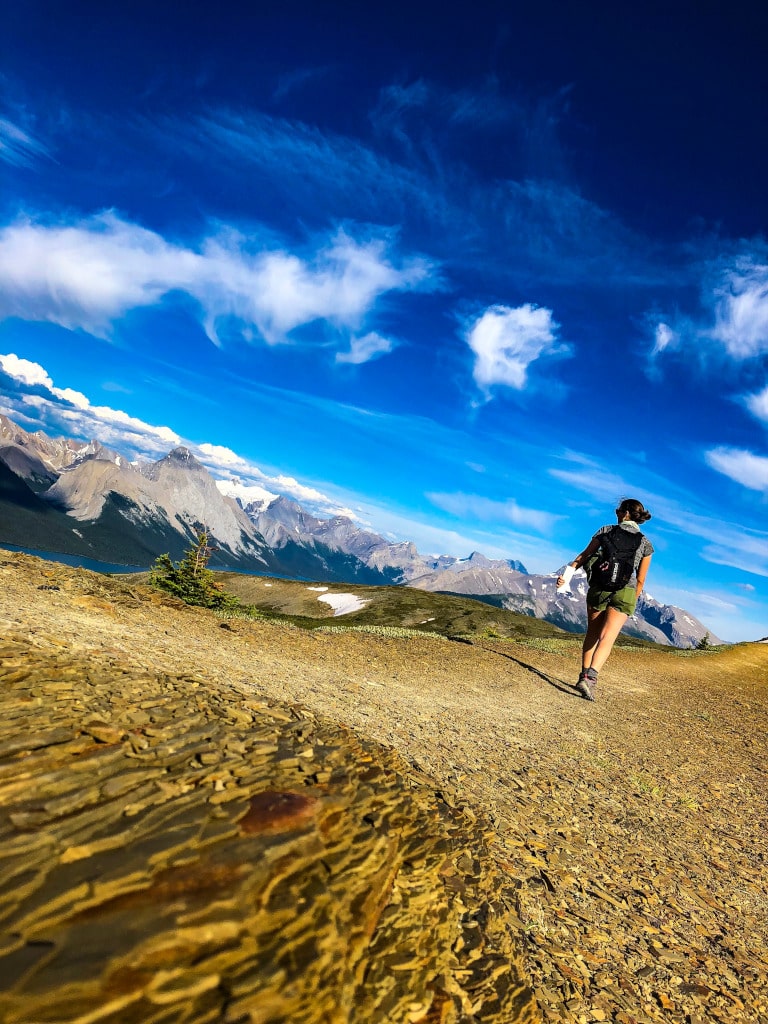 Their backcountry camping trip was coming up and they were very excited. They parked their car back at the Takakkaw Falls parking lot, hiked five miles along the Yoho River, past Laughing Falls to Twin Falls Campground. They set up their site and decided to hike the rest of the way to Twin Falls and the Chalet that rests at its base.

The Chalet was initially built by the Canadian Pacific Railway in 1908, construction was finished in 1923, and it opened the following year as a Tea House for hikers and travelers. The next day, after a night in the Canadian backcountry they hiked the five miles back to their car and drove to E.C. Manning Provincial Park, the last leg of their honeymoon.

They spent several days there enjoying the electric hum of ruby throated hummingbirds, the sunsets behind the spruce trees, the stellar jays and chipmunks. Their honeymoon was no tropical all-inclusive resort, but a once-in-a-lifetime opportunity to really get in touch with nature and traverse the country’s wild. Three months of travel and the couple now resides in Seattle, where they are planning their next journey into the evergreens.